Ok, I’ve been around a little while now, so perhaps a bullet-point style artistic resume makes more sense than a lengthy essay!

Appeared as an actor in a number of theatre productions such as Dario Fo’s Accidental death of an Anarchist on campus. Also acted and played music in Political Street theatre in Sydney and Melbourne. Played with Jugband/Swing bands The Shoeslapper String band and the Ice VoVo Orchestra. Acted in Stephen Radic’s Kelly film in the main role (can be seen as part of the touring Ned Kelly film collection).

Worked as a Kitchenhand at Cabrini Hospital and as a performer for Matildas Singing Telegrams while studying.

Worked as a freelance Musician and Teacher from 1984.

Played and toured with Bushwahzee folk band (1984-88), averaging 240 shows per year. Recorded on “The Waves of Rosebud”, “Put on Your Dancing Shoes” and “Penguin Parade”.

Played with Irish bands The Celts and The Liberties (1988-92), playing at The Port Fairy Folk Festival for 10 years straight, Maldon Folk Festival and National Celtic Festival among others, where I conducted many workshops. Played support to Christie Moore and Nelson Mandela at the Hamer Hall and Sports & Entertainment Centre, appeared on SBS Television. Recorded two albums with The Celts – “Shamrock Shore” and “Bonny Ship the Diamond“. Averaged 260 gigs a year with these Irish bands.

Tutor of Strings and Didjeridu at The Council of Adult Education (1992-94).

Director of Celtic Music Ensemble under the auspices of The Institute of Education and The University of Melbourne’s Faculty of Music (1993-2002).

Formed The AFMS ensemble which catered for a diverse and interesting group of amateur musicians in Sydney Rd. Recorded cd with ensemble and Elliott Folvig titled “First Take“. Took ensemble to many a festival and provided performance and musical experiences for many.

Took opportunity to work as an actor again, playing the part of James Reardon in the Universal Studio’s film “Ned Kelly” with Heath Ledger and Orlando Bloom (2002)

Worked as a freelance musician. Returned to study for post graduate study (1999-2001), studying Violin pedagogy. Graduated with a Graduate Diploma of Arts in Music (2002). Nominated and won two national music and teaching “Golden Fiddle” awards in 2004 and 2005.

One year as String Teacher at Billanook College (2004). Sessional Violin teaching work at St. Kevin’s and Scotch College (2004-07). String Teacher at The Knox School (2005-12), teaching a large number of private individual and group lessons, ensembles and classes from Grade 3 through to Year 7. In 2011 undertook study in the Counselling & Community Service area and went to part time at The Knox School.

Joined Stomp Dog in 2011. Recorded album “Songs of the dead“. Played many Victorian shows. Casual member of The Prairie Kings (Hillbilly swing) and The Whiskee Gypsies. Played shows with folk-rock band Zeptepi and guested on their albums “Winter in the Blood” (2012) and Coming Up For Air (2013). 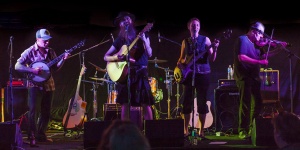 Achieved black belt in Karate in 2012, and studied for and graduated with a Diploma of Music at MWT Institute.

Many gigs as a solo performer in 2013. Work as Violin Teacher at Online Music Solutions (specialist violin and cello teaching in Primary Schools). Released “Tunes of an
Australian Fiddle and Mandolin Player“, a book of 92 original tunes.

2014 – Developed and refined a creative not repetitive method for string Players, and have successful teaching practices all over Melbourne/ Victoria.

Toured South Australia with “The Orange Tree production”, written and performed by Darryl Emmerson (based on the poetry of John Shaw Neilson). Live to air performance on ABC radio.